RUS 0:3 WAL – sensational stuff from Wales and Chris Coleman, who has masterminded a wonderful showing for his country at this tournament so far. A comprehensive, convincing drubbing of an extremely poor Russian side was no more than they deserved. They were truly excellent tonight at the Stadium Municipal in Toulouse. The Welsh set the tone early with a brilliant through ball from Liverpool’s Joe Allen that picked out Arsenal’s Aaron Ramsey, whose beautifully deft chip over Igor Akinfeev sent the Y Dreigiau fans into rapture. A terrific interception on the halfway line from Ben Davies released Real Madrid superstar Gareth Bale, who carried the ball forward quickly, a deflected tackle on Bale falling to Swansea City’s Neil Taylor, who scored at the second attempt to make it 2-0 and the Welsh were in dreamland! Zenit’s Artyom Dzyuba nearly profited from a rare lapse in concentration from the Welsh back three, only a superb one-handed save from Wayne Hennessey thwarting the big man. A wonderful run once agin from Bale, that started on the edge of his own box and saw him skip past three Russian defenders, saw him play in Sam Vokes whose scuffed shot should have been better. Bale ripped through the Russian defence time and time again, the two centre backs scared to death of the Welsh hero. Twice Akinfeev denied him early in the 2nd half as Wales dominated proceedings and looked to put the game beyond doubt. Joe Allen was sensational in midfield showing relentless determination. Bale finally settled the matter after a driving run from Ramsey resulted in the Arsenal man poking the ball through for him, and the superstar cooly slotting the ball past Akinfeev with the outside of his foot. A remarkable win for Wales, an achievement that will go down in Welsh football history and earn these players the respect they took for themselves tonight. 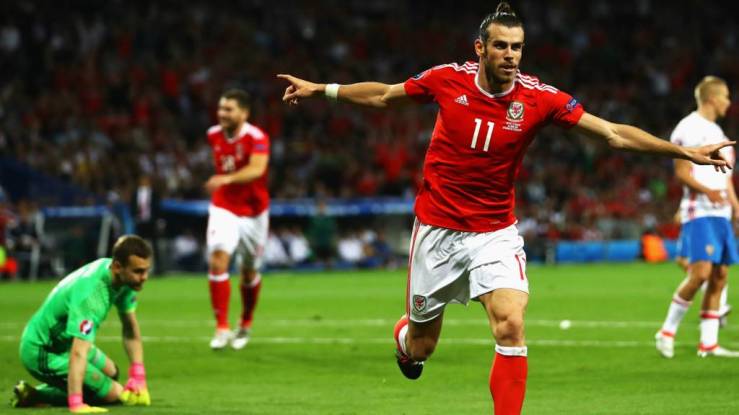